When looking for Thor in Norway, it’s important to remember that the legends of Norse Gods were shared orally for many years before being transcribed. It was the Vikings who carved these stories into wood and stone and forged talismans of Thor’s hammer into metal. And while time has taken the Viking people from us, their footprint is still very much here.  In the light of the upcoming Thor: Ragnarok film, I thought it would be fun to discuss some of the places where you can take your fandom to the next level.

Pro Tip: Heading to Norway? Renting a car is easy and convenient with Easyrentcars.
Their Price Drop Protector allows you to lock in savings if the total price of your car rental drops after you book!

Follow my adventure next week as I hit the red carpet for the Thor: Ragnarok LA Premiere! #ThorRagnarokEvent

I’ve always been captivated by Viking Age people, mostly due to their primitive worship of ancient deities. Namely, Norse Gods. Much like the other ancient myths of the world, the pagan belief system of Nordic Gods, along with its legends, were converted by Christians into Norse Mythology. Centuries later, these stories and characters are just as fantastic. So fantastic that tales of Thor, Odin, and the Valkyries continue to thrive in pop culture today as we’ve seen with MARVEL Comics’ telling of The Mighty Thor and its film franchise within the MARVEL Cinematic Universe, Thor. And as Thor debuts its latest of three films, Thor: Ragnarok, I can’t help but revisit my travels to the spectacular places where these legends remain.

A Little History Nibble About Vikings and Norse Mythology

For more information on Viking and Norse Mythology go here

First I want to bring to your attention the legacy of Thor’s Hammer, Mjölnir. It’s depicted in Norse mythology as one of the most fearsome and powerful weapons in existence, capable of leveling mountains. Today, it can be found in ancient carvings known as runestones found in Sweden and Denmark.

This 11th-century runestone is in Altuna, Sweden. By Foto Olof Ekström 2005. User OlofE on sv.wikipedia [GFDL (http://www.gnu.org/copyleft/fdl.html) or CC-BY-SA-3.0 (http://creativecommons.org/licenses/by-sa/3.0/)], via Wikimedia Commons

This 10th-century runestone is found in Öland, Sweden. Photo by Berig [GFDL (http://www.gnu.org/copyleft/fdl.html) or CC-BY-SA-3.0 (http://creativecommons.org/licenses/by-sa/3.0/)], via Wikimedia Commons

This is one of 2 ancient runestones in Bjärby synod, Sweden. CCL

This is the second of 2 ancient runestones in Bjärby synod, Sweden. CCL 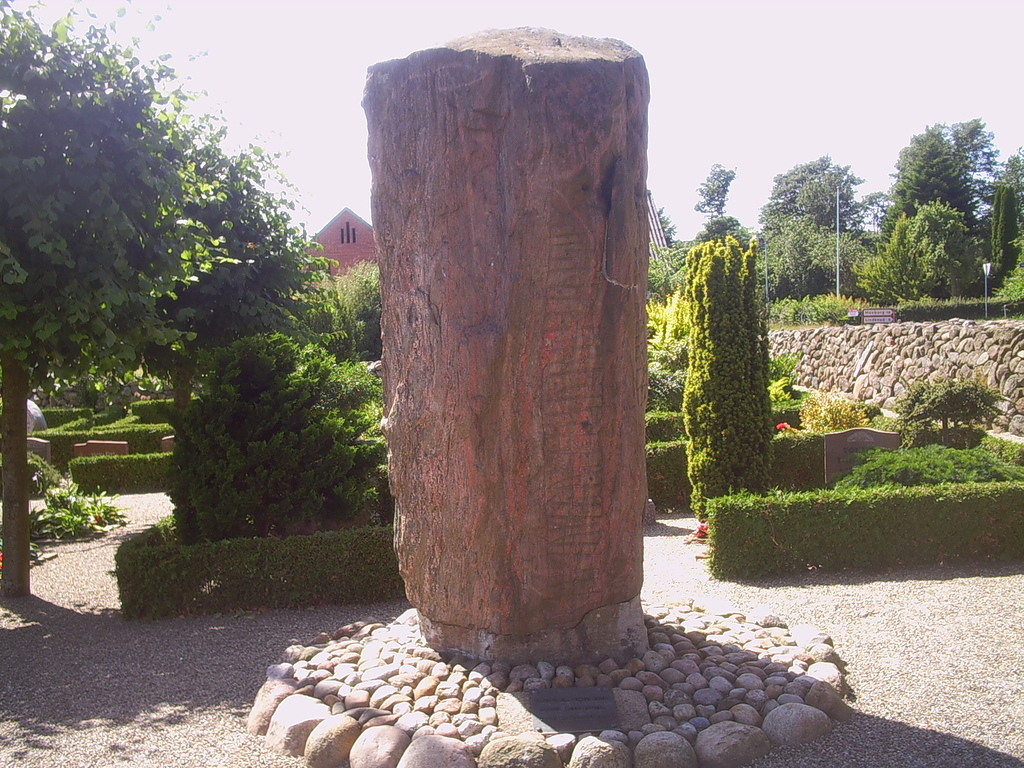 This 9th-century runestone is in Læborg, Denmark. By alexanderdrachmann (http://flickr.com/photos/drachmann/327056492/) [CC BY-SA 2.0 (https://creativecommons.org/licenses/by-sa/2.0)], via Wikimedia Commons

But, beyond the runestones in Sweden and Denmark, Norway is home to sacred and archaeological locations where the Viking people are remembered. The same Vikings who worshipped Thor and lived by the legends of the Gods. I was fortunate enough to explore Norway and it’s incredible Viking sites.

The Norwegian History Center sits among beautiful untouched landscapes of Avaldsnes. Its round entrance was built to symbolize Mímir’s Well, the source of all knowledge and wisdom in Norse mythology. A set of stairs (there’s a lift too) winds you into the earth landing you in a well-appointed history center which takes you through 3,000 years across the ages and even touches a bit on Norse Mythology.

Avaldsnes, the oldest Viking throne of Norway and home to Viking King Harald Fairhair. This was home to not only Vikings but many of their Iron Age ancestors. It’s here where legends of Gods and heroes come together, and you can feel every bit of that magic as soon as you arrive at this special place. While here my son and I opted to explore the Norwegian History Center. Inside there are loads of Viking artifacts. You can also learn how to write in Rune and learn all about Thor, Odin, Frigg and the Valkyries.

Here we are playing an old Viking game. It’s very interactive for kids with games, a classroom, and a fun audio tour with movies. I would love this to be my living space… what a view!

It’s very interactive for kids with games, a classroom, and a fun audio tour with movies. Here The Little is checking out Viking Age artifacts.

Vikings believed the soul raised from the body after one’s passing. This is represented in this display.

Viking artifacts. The rings were worn on the neck as a sign of power and great wealth. Usually by a King.

It’s been told by Snorre (Icelandic historian, poet, and politician) the God Odin came to Avaldsnes in 998 AD to tell King Olav Tryggvason great and wondrous stories about the past. It was also told that Thor waded in these waters.

Oslo is perhaps one of the most important locations for those looking to trace the legends of Thor as it’s home to the largest Viking burial excavation ever. There are few things in this world that trump an adorable, frizzy-haired troll. One of them is a 1,000-year-old Viking ship. The Viking Ship Museum is home to three ships; The Oseberg, the Gokstad, and Tune ships.

Replica of a Viking age design

The Oseberg Viking Ship, discovered in 1903, was found in the world’s largest Viking grave on the Oseberg Farm just a short distance south of Oslo. The Oseberg Ship was the burial ship for two important women. Along with the Oseberg Viking Ship, an extensive collection of burial gifts and ship equipment was discovered. The ship’s findings are in the Viking Ship Museum. And where there are Vikings, there are carvings. Carvings which depict the many legends of Norse Gods, including those of Thor and his hammer.

the Gokstad and Tune ships were used as burial ships for powerful men. They could have been brave and loyal warriors or maybe the sons of kings. All we know is they were a big deal.

A Viking Cart in detail

A special find while in Oslo is the Oslo City Hall carvings of Norse Mythology. A quick walk around the building will tell the story of important Norse Gods.

Norse Mythology carvings in the courtyard of Oslo City Hall

There are many places in Norway I have yet to explore but it’s on my list. It’s important to keep in mind that the legends of Norse Gods are all around us. They have inspired great stories, characters, and films. And they will continue to do so as they are among the greatest stories ever told by man. And, let’s be honest, it’s really hard to ignore a rainbow bridge.

Special thanks to Visit Norway USA for helping me explore these places. For more information on planning your trip to explore Thor in Norway go to visitnorwayusa.com.