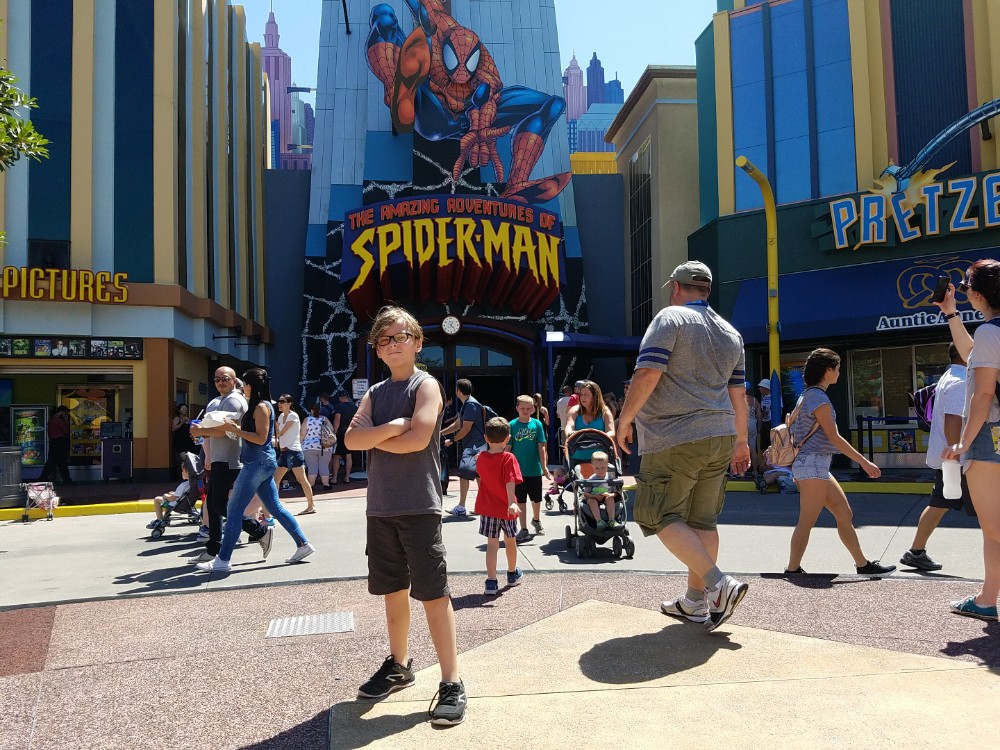 You might know if you’ve been following my adventures for any length of time, that I am a Florida resident living in Atlanta. Having grown up in Florida has given me a lifetime of experience when it comes to visiting Universal Orlando Resort and Halloween Horror Nights. Simply put, I’m a fan. Last week I hit the road with Kia Niro to escape Atlanta for some of my favorite thrills and fandom at Universal Orlando Resort. I hit Universal Studios, Islands of Adventure and Halloween Horror Nights 27 for a dose of my favorite geeky highlights. Per usual, it was loads of fun, with an epic side of Horror. Here are my highlights.

The Best Things to do at Universal Orlando Resort for Geeks

If you’ve never been to Universal Orlando Resort then start planning now. Of all the fun and geeky places to get your fandom fix, this is at the top of the list. With themed worlds after Harry Potter, the Simpsons, Marvel and Jurassic Park, you’ll find yourself in fandom heaven. Not to mention finding cool buys at one of their many gift shops (one of my favorite things to do).

Islands of Adventure – My Favorite Highlights

Islands of Adventure is always a blast whether you’re a film fan or not. It’s full of thrilling rides for all ages and has a few places to cool off from the Florida heat.

Marvel Island is always my first place to visit when I go to Islands of Adventure. It’s right at the front of the park and offers a great place to get your blood pumping for the day. Whether you’re seeking thrills like the Incredible Hulk roller coaster or you just want to meander through awesome gift stores where you’re sure to find some fan picks, this is geek heaven. It feels like a page from a comic book especially when the Marvel characters come out on their ATVs for photo ops.

I grew up to Jurassic Park and have been a fan of the film franchise since. Being able to spend time in a world themed to one of my favorite films is a treat. It takes me back and lets me share this with my son who is a fan now too.

Ask any Harry Potter fan on the planet where they want to be and they’ll tell you the Wizarding World of Harry Potter. This is a place that never gets old. From its meticulously crafted gift shops to Hogwarts itself, I always feel like I’m inside a Harry Potter film when I’m here. And the Butterbeer is always a treat.

I always go to Islands of Adventure first and make Hogsmeade the last stop of my day so I can take the Hogwarts Express to Diagon Alley. I can easily spend three hours covering all of the Wizarding World of Harry Potter. So keep that in mind if you’re planning your trip.

Universal Studios is where it all began. Before Islands of Adventure, CityWalk, Volcano Bay and Halloween Horror Nights, this is where the magic happened. And much of that magic still remains while other parts of the park have been expanded and upgraded. There’s something special about walking down Hollywood Boulevard that brings you from Florida to California in an instant. The same goes for San Francisco, London, and New York City. You can never go wrong with a bit of magic, fandom, and adventure in one place. Here are my favorite geeky things to do at Universal Studios.

I’m a mega Harry Potter fan so this is at the top of my list. Plus, it’s always the first stop when I’m coming off the Hogwarts Express from Islands of Adventure with my two-park pass. The trip to the King’s Cross London Underground station is pure magic, but when you step off, it’s like being in London for real! I love bringing our interactive wands, checking out all the stores, taking loads of pictures and taking in all the hidden Easter eggs. I mean, where else can you be a wizard and get Butterbeer ice cream? Want to know more about things to do in Diagon Alley? Check out my Diagon Alley highlights here.

Another classic fandom for me is the Simpsons. This show has spanned most of my life and the Simpson’s World at Universal Studios really brings it home. They have everything from Duff Beer to the Kwik-E-Mart to feed your fandom. And if you look close, you’ll even find the Delorean from Back to the Future.

There are a few rides, stores and restaurants that are not themed after a particular world but are still really extra when it comes to fandom and geeky favorites. These are my picks:

To date, this is my favorite thing to do during the Halloween season. And I’m telling you, every year it gets better and better. Not all the houses blow my socks off, but most of them do. They spare no expense when it comes to bringing the horror from the films to the fans. I don’t go to get scared, I go to be a part of the scenes from my favorite horror franchises. This year was incredible. The scare zones were better than ever and the haunted house themes were some of my favorites to date (although I always loved the Walking Dead Ones). I was sad to see the last show of Bill and Ted’s Excellent Adventure though. That was my ultimate low. Check out my full Halloween Horror Nights 27 review here.

If you’re looking for something to cool off from the Florida sun I recommend heading over the Universal Orlando Resort’s all new water park, Volcano Bay. The island-themed park has 18 attractions allowing you to find relaxation and thrills all in the same day. And talk about stress-free, their innovative TapuTapu system gives guests a waterproof wearable designed to hold your place in a virtual line so you never have to wait!

I’ve been driving the Kia Niro Hybrid all year. It’s proven over and over again to be an incredible road trip car. I fill it up with under $25 and get an average of 500 miles. Driving from Atlanta to Orlando took just a little over one tank of fuel. That just blows my mind. Adventures are more accessible than ever before. I especially love the space, comfort, and technology in the cabin. And it has all the safety features I could want to keep me confident on the road no matter what kind of traffic or unfamiliar place I’m in. Its Harmon/Kardon speaker system gives me all the road trip tunes with quality and its hands-free features allow me to stay focused on the road. To learn more about the Kia Niro Hybrid check out kia.com.

What’s your favorite thing to do at Universal Orlando Resort? Tell me in the comments below!