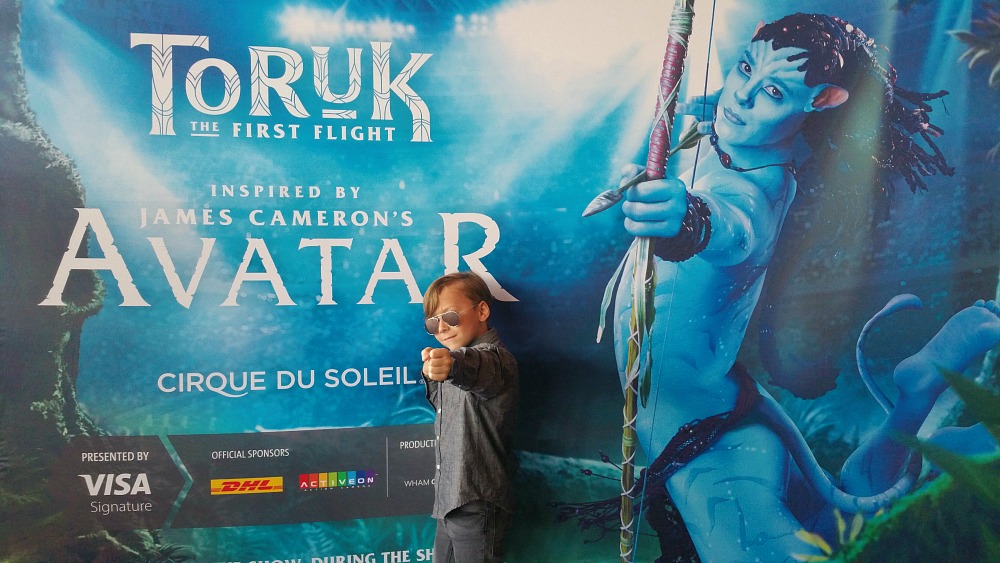 Last night we attended the Atlanta premiere of TORUK First Flight the Avatar inspired performance. I’ve been to five Cirque du Soleils, all of which I love, and let me tell you this one was no different.

TORUK – The First Flight is inspired by James Cameron’s AVATAR. It envisions a world beyond imagination set thousands of years before the events depicted in the film. The word Toruk, in the Na’vi language, refers to the great leonopteryx, the mighty red and orange predator that rules the Pandoran sky. Central in Na’vi lore and culture, this fascinating creature is crucial to the Na’vi clans’ sense of destiny and interconnectedness – and is about to be ridden for the very first time by a Na’vi.

This is a live performance and can only be experienced for a limited time at the Infinite Energy Arena on June 15-19, 2016.

As soon as we walked in and saw the stage we were blown away. The digital backdrop allowed this stage to transform into five different environments (probably more) and really created the presence of Pandora.

Every time a new prop came out followed by a new performance I was blown away. I really felt like I was inside Pandora! And with the addition of the TORUK app, we were able to be a part of the show adding lighting with our phones and turning the arena into a twinkling fantasy world.

The quality of this show was no different than any other Cirque du Soleil with mind blowing stunt performances, music, and dance.

This is a must see for anyone who loved Avatar.

Tickets can be purchased HERE.

TORUK – The First Flight is Cirque du Soleil’s 37th production since 1984. The company has brought wonder and delight to more than 155 million spectators in more than 300 cities on six continents. Cirque du Soleil has close to 4,000 employees, including 1,300 performing artists from close to 50 different countries.