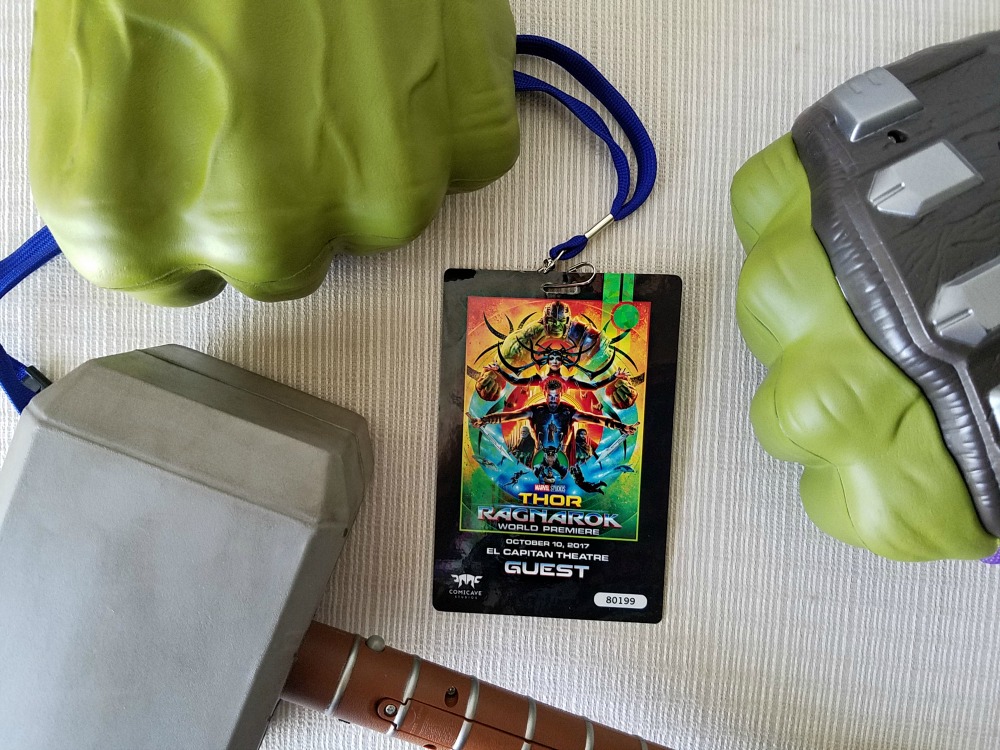 Last Tuesday I attended the Thor Ragnarok LA Premiere. It’s not every day that I get to screen my favorite superhero movies. Hell, half the time I’m too busy to even catch them in theaters. But going to a red carpet premiere? Watching a film for the first time among the very talent who brought it to the screen, now that’s like a once in a lifetime chance.

Want a spoiler-free review of Thor: Ragnarok? I have you covered!

First, let me set the scene of the Thor: Ragnarok LA Premiere red carpet for you. They are not all like this, but for the most part, there are four main sections. You have the outer flank where the press has assigned positions so they can get their photos and do their interviews. You have the center where the talent, filmmakers, execs and their families/publicity teams walk as they get photographed and interviewed.

Then you have the other outer flank where everyone else is loading into the theater and taking pictures of celebrities and themselves along the way. There are security guards telling you to move as they try to get everyone in place. In short, it’s chaotic. But I love it. It’s exciting and a lot of fun to see the stars from the film, their amazing outfits, and charisma. And there are always some cool finds along the way.

Looking for interviews? Check out my interviews with President of Marvel Studios Kevin Feige, Director Taika Waititi, Karl Urban (Skurge), and live on Monday at 9 am EST Rachel House (Topaz). You can also check out my coverage of the media press conference here.

Check out the celebrities who attended:

The red carpet is a busy place, but I was able to get a couple pics on the way in.

Beyond loads of celebrities, the red carpet had a couple other things in store

Sakaar: At the end of the red carpet was a massive set for photo ops complete with actors. The area was designed to represent Sakaar. I hadn’t seen the film yet so I wasn’t sure who these strange beings were at the time, but I didn’t hesitate to catch a photo with friends.

With my blogging lovelies

Toys: There is usually one or two vendors on the carpet giving out swag of some sort. For this event, there wasn’t any swag but there was a really cool merch table from Comicave with giant characters I had never seen before. I absolutely loved them! Apparently, they are hitting major retailers this year so keep an eye out for these. I sure will be!

Stage Presence: Since this was my first Marvel premiere I had a different experience than other premieres. Apparently, this is a standard thing, but the cast and filmmakers came out on stage to be introduced. I thought that was really cool in case you missed them in them among chaos on the red carpet. Plus it was a great way to get a full view of their red carpet look.

@Disney The cast and filmmakers on stage

Costumes: There was only one costume as far as I could see and it was Chris Hemsworth’s Roadworn costume. I was lucky that I spotted it on my way out. I did not see it beyond the crowd coming in.

I was able to catch Tom Hiddleston (Loki) and Taika Waititi (Director) after the premiere. They were both super cool to take a picture with me for the blog. And I do mean SUPER cool as these events are always crazy busy and they have little to no time for chit chat. But they were both happy to lean in for a snap for my story. Thanks, guys!

Caught a pic with Tom after the premiere

One more with Taika

Film Synopsis: The film review is under embargo until October 19th but I can tell you the synopsis in case you’ve missed it. According to the trailer, the Mighty Thor (Chris Hemsworth) is imprisoned on the other side of the universe. He finds himself in a deadly gladiatorial contest that pits him against the Hulk (Mark Ruffalo), his former ally and fellow Avenger. Thor’s quest for survival leads him in a race against time to prevent the all-powerful Hela (Cate Blanchett) from destroying his home world and the Asgardian civilization.

Overall the Thor: Ragnarok LA Premiere was exciting and eventful. The red carpet looks were incredible, the photo ops were plenty and the film was unimaginably fantastic, but you’ll have to wait for my review on October 19th.

Disney/Marvel invited me on an all-expenses-paid trip to attend this event. It n no way shapes my opinions in this post.