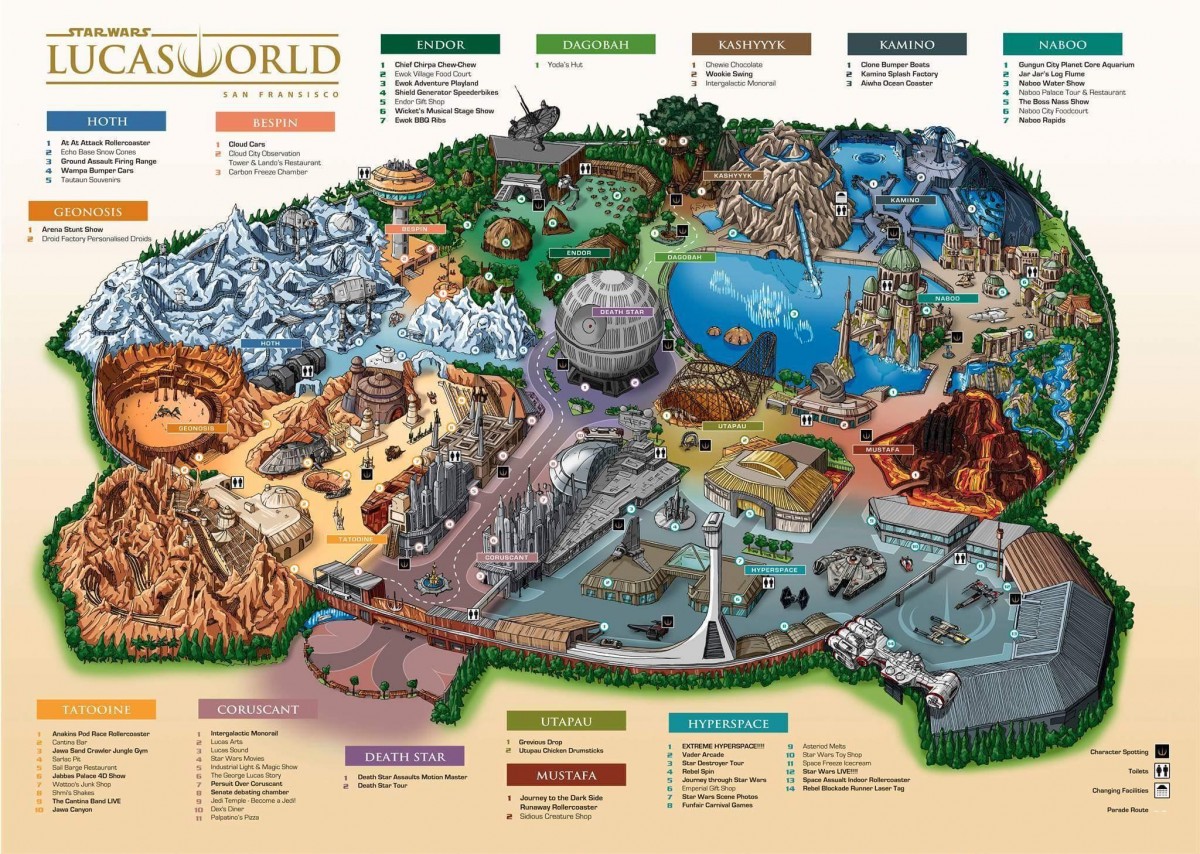 So I recently came across this on the world-wide web… A totally rad looking picture of what appears to be Lucas World theme park map (Star Wars Land). If you’ve been following me recently then you know I was among the some two hundred press at the D23 Expo, the world’s largest Disney, Marvel, Lucasfilm fandom event where, every two years thousands of fans join to peep the latest merch, get breaking announcements on upcoming films, see what’s in store for gaming and get park announcements while seeing a slew of surprise talents, filmmakers and composers.

So, naturally this was the weekend when Disney announced at their Animation panel their mega breaking news about the new Star Wars Land expansion for Disney Orlando Hollywood Studios and Disneyland California.

Twitter immediately burst into a ball of flames when said two hundred members of the press announced to the news to the planet… Then, later that day at the Disney Parks panel eight thousand fans saw a much bigger look at what’s to come for Disney parks around the world.

And the crowd went wild.

I was part of the press twitter frenzy at the Disney Animation panel, and later in the Disney Parks panel when they went into detail about what’s coming for the expansions. This is my first hand account of fact vs fiction.

So is the Lucas World theme park map fake?

I never saw this Lucas World theme park map picture in either of these panels, it wasn’t in any of our press releases and the hashtag that has been given to the park is #StarWarsLand. You can find the twitter deets here.

So I think it’s pretty safe to say that although this park map looks amazeballs, it’s not official. That still doesn’t answer the question of whether or not it’s a leak.

This is what I saw for the concept art for Star Wars Land.

Copyright Disney. This is the actual concept art shown at the D23 EXPO panel recently which I personally witnessed.

This is also concept art from what will be coming much sooner to parks to get people ready for the big launch (which a date has not been announced for).

Season of the Force Coming to Disney Parks —

This new seasonal event, beginning early 2016, brings new experiences to both coasts. In Tomorrowland at Disneyland park, guests will explore the Star Wars galaxy with special entertainment throughout the land, themed food locations and more.

Guests also will be thrilled to climb aboard Hyperspace Mountain, a remaining of the classic Space Mountain attraction, in which guests will join an X-wing Starfighter battle. At Disney’s Hollywood Studios, guests will close out weekend nights with a new fireworks spectacular set to the iconic score of the Star Wars movies. (Disney Parks)

Star Wars Launch Bay Coming to Disneyland Resort and Walt Disney World Resort — This interactive experience will take guests into the upcoming film, Star Wars: The Force Awakens, with special exhibits and peeks behind the scenes, including opportunities to visit with new and favorite Star Wars characters, special merchandise and food offerings.

Star Wars Launch Bay will be located in the Animation Courtyard at Disney’s Hollywood Studios and in Tomorrowland at Disneyland park. (Disney Parks)

This is what Star Wars Land has gone so far…

Check out this video from the actual panel I saw:

In closing, now that all the facts are out on the table, I’d like to say in the nicest way possible… Whoever made this graphic has entirely too much time on their hands. There is no way in hiznell this is a leak. Anyone with an attention span that surpasses a gnat can see this is insanely huge (like entire theme park huge), and it looks nothing like what was announced.

Kudos for pipe dreams. it would be pretty rad if they made a whole theme park, but that’s not what’s happening. Sorry to burst your bubble kids. This one is FAKE!

May the force be with you.

What would you like to see at Star Wars Land?