Every culture has their own share of myths, stories, and legendary creatures. One particularly intriguing set of creatures, Yokai, originate in Japan and are monsters and spirits that have supernatural powers. The Japanese Yokai are known to range from simply mischievous to outright malicious, and some are even known to occasionally bring good fortune to those nearby. They can take the form of animals, humans, or even inhabit inanimate objects. I’ve rounded up some intriguing Japanese Yokai and the places in Japan where you might be able to find them.

Japanese Yokai and Where to Find Them

Photo by Triton via Wikimedia Commons

Abura-sumashi is a Japanese Yokai said to be found in the Kumamoto prefecture, located on the island of Kyushu. He is known for surprising people on the Kusazumigoe mountain pass. In the days before electricity, oil was used for light and heat, and was often stolen from temples and shrines. This Yokai is assumed to be the ghost of a human who stole oil and was reincarnated as a Yokai for punishment. 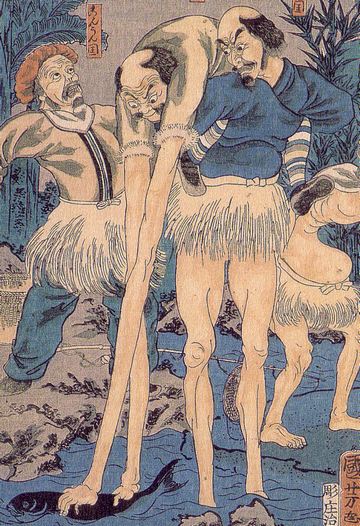 Bakeneko is a cat-like Yokai. Since cats live so close to humans, yet also still have such a wild nature to them, Yokai cat stories are quite popular. Japanese Yokai legends about Bakeneko are very prevalent in all areas and include many aspects like shapeshifting, speaking like humans, and dancing. In one story from Aji Island and in the Oki Islands, a Bakeneko shape-shifted into a human and sumo-wrestled.

Satori are Yokai that are said to live within the mountains of Hido and Mino in the Gifu Prefecture. They often come out when people are walking along mountain paths. They’re able to read people’s minds and can say the persons thoughts out loud faster than the human can.

The Yamabiko is a dog-like mountain dwelling Yokai and there is a small rock mountain in Kitaazumi District called Yamabiko rock. When on this mountain and one gets a delayed echo, it is said to be the Yokai answering.

Wherever you go visit in Japan, there is sure to be a local Yokai legend. Researching local myths and stories before visiting a country allows you to immerse yourself into the culture and spending some time searching for Yokai is a fantastic way to add to the whimsy and fun of travel.

Even if you can’t hop on a plane to Japan any time soon to look for Yokai, I have good news! One of the newest shows on Disney XD, Yo-Kai Watch, brings the fun of Yokai to your own home. My son is obsessed with the show and we were recently sent some of the Yo-Kai Watch toys to find some of these mischievous spirits in our own backyard.

Yo-Kai Watch, a popular game series, is now a hit TV show here in the US on Disney XD. As I mentioned, my son loves watching it and whenever we’re out, he is on alert for any potential Yokai he might see. However, as any watcher of the show knows, you need the Yo-Kai Watch to see these spirits. As soon as his watch arrived, we set off on an adventure to see who we could find.

The Yo-Kai Watch toy is a lot of fun. You put one of the medals inside and it plays the music for that type of Yokai. It’s basically like a tiny dance party on your wrist. Although the watch is big, it’s not heavy and my 4-year-old had no trouble getting it to work.

He gets a lot of imaginary play time with this and wears it everywhere we go . The more medals you collect, the more fun it is to play with – we just pop the medals into the Yo-Kai Medallium collector book and take them out with us to find the elusive Yokai.

Featured image by Skyseeker via Flickr Creative Commons. I received sample for review. All opinions are of my own.