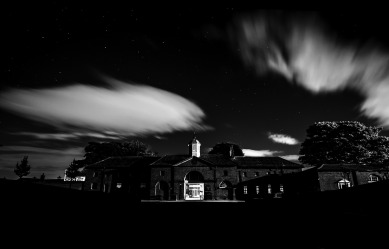 Leeds is one of the most metropolitan cities in the north of England, which has recently come to be known as the London of the north. Leeds is also an old city and carries many a local legends, including hundreds of ghostly tales.

One of the most beautiful parts of Leeds is Temple Newsam, a farm and the grounds to the titular stately home. Temple Newsam house is a beautiful Tudor mansion dating back to 1520, known as ‘The Hampton Court of the North’. I used to frequently go there as a little boy with my grandma to visit the farm on its grounds, but I didn’t hear about the ghost legends until I was a bit older and more curious about such things.

Ghost Night Events in the U.K.

There are said to be a handful of spirits haunting the house, but the most well known has to be the Blue Lady. She is said to be the ghost of Miss Mary Ingham (1638-1652). Legend has it that she was travelling back to Temple Newsam after visiting relatives when her cart was set upon by three robbers who then dragged her out and stole her possessions. Apparently this scarred her psychologically and from then on she chose to hide her valuables in random places throughout the house. The Blue Lady has supposedly been seen trying to find her belongings again that she hid all those years ago.

Other ghosts include a monk in brown robes, a knight (in 1155 the area was given to the Knights Templar) , a small boy who climbs out of a cupboard and runs from the Darnley room, and a weird misty apparition. Apparently a young serving girl who was murdered by a footman also haunts the back stairs of the house.

Around this time of year you can usually catch a midnight “ghost hunt” in the house, where thrill-seekers wander the house for a chance to catch sight of one of the many ghosts that are said to inhabit it.