If you’re a fan of the fantasy and folklore genres, then exploring castles and historic places is probably right up your street. But what if you could explore castles, mermaids, and creepy places in one of the most sought-after destinations in the US? You might be surprised to find there are several unusual Florida attractions that tick all your adventure boxes.

While the US isn’t old in the sense of centuries-old monuments and places like Stonehenge, we still have our share of awe-inspiring and cool places. Florida is no exception.

Read on to learn more about these unusual Florida attractions to explore on your next trip to the ‘Sunshine State.’

As a native Floridian, I can say there are more things to do in Florida than just beaches; while our sunny state may often feel like a haven full of only white sand and sparkling oceans, we also have an amazing array of unusual Florida attractions that sound like they’re straight from the pages of fairytales.

Stories of such a fountain have been told throughout the world for thousands of years, but the stories are now most heavily associated with Juan Ponce de Leon. The Fountain of Youth Archaeological Park is located where Ponce de León is traditionally said to have landed in Florida.

Although not quite a castle, it was originally built in Florida City, Florida in 1923 before he moved it by himself with only a truck 10 miles north to where it is currently located.

According to the pamphlets handed out at Coral Castle, Edward was rejected by his 16-year-old fiancé and so he built this “castle” in honor of her. There are many theories on how it was built as no one claims to have seen him work on the castle and considering some of these megalithic stones weigh several tons and Edward, a 5’1″, 100lb. man built it by himself, it’s quite impressive regardless of how it was constructed.

Our next spot on our list of unusual Florida attractions is Devil’s Den in Williston, Florida. It’s an underground spring located in a dry cave where the water is a constant 72 degrees Fahrenheit. On cold mornings you can see steam rising from it.

Oddly enough it’s the steam that caused early settlers to name this area Devil’s Den since it resembled the smoke rising from a chimney, presumably the chimney of Hell.

This spot was also home to many now extinct animal fossils dating back to the Pleistocene Age as well as human remains dated to about 7,500 BC, which can all be seen at The University of Florida’s, Florida Museum of Natural History.

Devil’s Millhopper Geological State Park, located in Gainesville, Florida is a 120 foot deep and 500 foot wide sinkhole. And it’s certainly one of the more unusual Florida attractions that we know of.

Shaped like the hopper of a mill, it was filled with fossilized bones. Thus, it earned the name ‘Devil’s Millhopper’ because it was sending the feed down the hopper all the way to the Devil’s mill at the center of the Earth.

There are 12 springs that feed the pond at the bottom of the sinkhole and there’s a boardwalk you can take all the way down to the bottom – of all the unusual Florida attractions, this one does require some perseverance to reach the bottom since there are a lot of stairs. 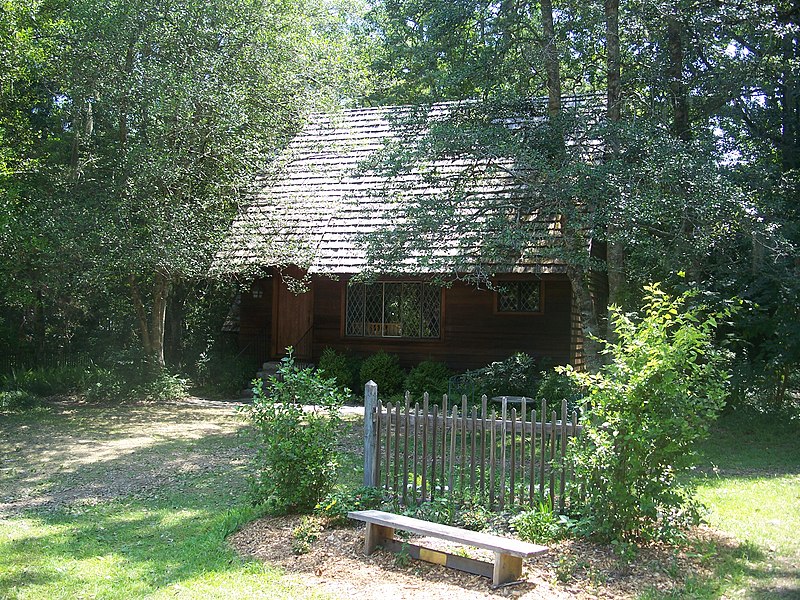 Lichgate on High Road is in Tallahassee, Florida, and was the home of FSU English professor, Laura Jepson. She purchased the property in 1955 and designed this Tudor-style fairytale cottage as her dream home, and also as a way to save the massively beautiful live oak tree on the property.

A lichgate is a transition point between life and light – and this was like a place to go between the modern world and one’s very own fairytale. Her home is truly a place to inspire and get a glimpse of magic – and who knows, you may even see a fairy or two while there.

Of all the touristy unusual Florida attractions, watching the Weeki Wachee Mermaids in Spring Hill, Florida is probably one of the most iconic. For almost 60 years now, at what was once America’s most popular roadside attraction, the mermaids have showcased their underwater ballet for visitors at the park.

The spring itself is so deep that the bottom has never been found and it pumps out more than 117 million gallons of crystal clear 74F degree water every day!

Bok Tower Gardens, located in Lake Wales, Florida, consists of a 250 acre breathtaking garden along with the 205 ft high Singing Tower that is also a bird sanctuary. The tower is built on Iron Mountain which is one of the highest points in Florida.

It began in 1921 when Edward Bok and his wife wanted to create a bird sanctuary. Bok commissioned the gardens to transform the once barren sandhill into “a spot of beauty second to none in the country.”

These gardens are truly magnificent and make you feel as if you’ve stepped into a storybook where a bird will perch on your finger and sing a song.

Florida State Cavern Park is located in Marianna, Florida in the Panhandle. These are the only accessible air-filled caves in the state of Florida.

This type of cave is rare in Florida because as these limestone caverns form over time, they usually stop at the sinkhole stage and do not make it to an actual cave formation.

Legends have it that many a mythical creature can be found in caves, like gnomes, trolls, and goblins, so it’s best to keep your eyes on alert for these mischievous creatures of lore. But, whether you spot a creature or not, these caves are among the most beautiful unusual Florida attractions to be seen.

Photo by Elkman via Wikimedia Commons

Neptune Memorial Reef is an underwater mausoleum and is about 3 miles off of the coast of Key Biscayne, Florida. It’s a man-made reef, but reef-building coral has been identified at the site, making it a true coral reef.

Sure, this place is a little eery given that this is where one can be buried at sea, but it looks like the closest thing we have to the Lost City of Atlantis. Definitely a must-see for lovers of legends and the sea and for anyone looking for an adventure.

If you’re ever looking for unusual Florida attractions that are off the beaten path of touristy beaches or theme parks, check out one of these awe-inspiring destinations. It’s like taking a step back in time to the legends and stories that we can only dream of.