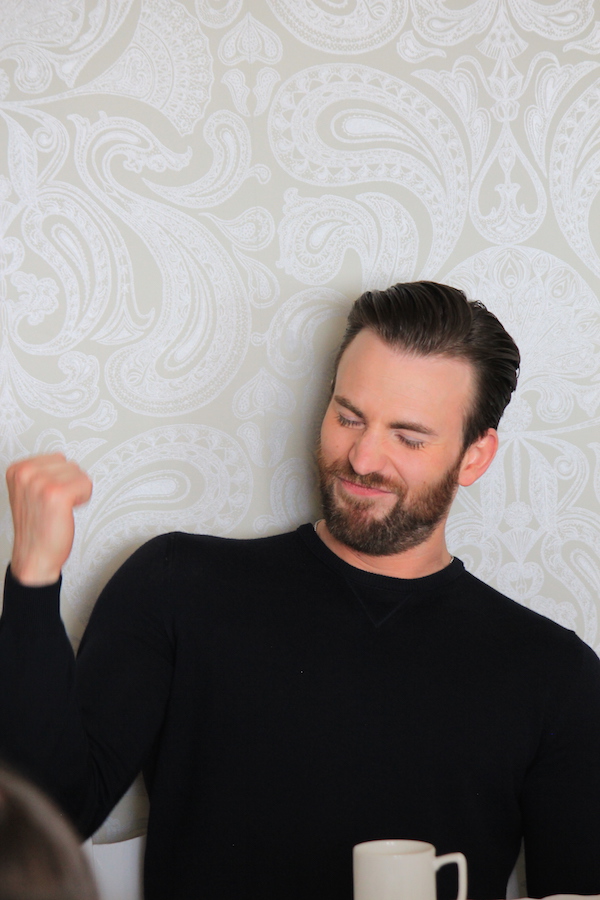 It’s been two weeks since the LA Red Carpet Premiere of Captain America Civil War where twenty-five top bloggers flew out to seize the night and interview cast and filmmakers.

As a proud Disney blogger, I can relate to the excitement of the red carpet, and what an epic film to see premiere right!

Even cooler than the glitz and glam of a Hollywood red carpet is sitting down in a small room with the Marvel talent we all have grown to love. And Chris Evans, need I say more?

I can tell you first hand, bloggers always have the best questions. They’re not loaded with tabloid drama, it’s all about the fun and undying love for the film. We are pretty normal people just like you.

We do regular stuff at home but when we do press events it’s off the charts. We really do live double lives. Now I’ve never had the pleasure of interviewing Chris Evans (yet, fingers crossed), but from what I’ve heard he’s the most charming and delightful man to interview.

And funny too! Here are the best of the Chris Evans interviews from Shelley at Sweep Tight, Kas at Southern Bellas Ways and Tara at Trippin with Tara. Be sure to follow them on twitter here for live press tweets!

The Best of the Blogger Captain America Interview with Chris Evans

He was so real.” -Shelley, Sweep Tight

Chris Evans on working with Robert Downey Jr. from Shelley at Sweep Tight.

He’s such a force. He’s so good and he owns the oxygen. He’s scary because he’s so good… he’s just good at anything he does.” – Chris Evans

My take on this: So much respect for Robert Downey Jr., he is a phenomenal artist. I can only imagine the energy in the room when working with him. Chris is so humble too!

I mean he’s Captain America and he’s still so very humble and down to earth. I think it’s so sweet.

I was so proud of Disney for standing up to that. Making a statement and saying listen, this is what we feel, this is what we believe in and, look it’s a hate bill that they were trying to pass, it’s one of those gray areas where you talk to these people, and they’re like well we’re allowed to think what we want.” -Chris Evans

My take on this: Super big props to Disney for standing up for this. I couldn’t agree more. They certainly have a lot of weight here. As a greater Atlanta resident, I am proud that Georgia pulls out on this.

More great things to be said about Chris Evans from Tara at Trippin with Tara. She describes Chris as

He’s honest, a straight shooter, REALLY good looking, so funny, and well, more like all American than Captain America. – Tara, Trippin with Tara

My take on this: I love how Tara describes Chris Evans here. Yup, all true! Super cool of him to be down to earth with bloggers too. What a great scene this had to be!

Chris Evans on getting all suited up again,

When you see the suit, you’re excited to get the suit on and you’re very honored and humbled that you get to have some sort of a connection to it, because it is bigger than you.”

My take on this: I can’t even imagine Captain America nervous. Seeing a human side of a superhero is seriously sexy.

Chris Evans is just all-around beautiful inside and out. Keeping it real is the best way to be, big props here.

The blogger interviews really are a blast and Disney sends out a group to nearly every film event.

So next time you see Disney Marvel sending their bloggers out to red carpet premieres and press junkets, follow along!

You really get the best details from blogger interviews, and you get to be a part of the live-action too.

Plus, how often is it you get to interact with people who go to red carpets? It’s pretty cool!

And if you’re hardcore enough to follow bloggers on the red carpet, then you probably love the smartphone games Disney Interactive makes.
They always go above and beyond to create gaming experiences that are fun and engaging.
But let’s be real, moms like to have big-girl fun too which is why I think it’s super cool that there are now Captain America-themed slots online and in so many casinos.
I’ll be looking for the slots next time I’m in Vegas or at the Hard Rock Seminole back in Florida so I can rock my Captain America pride #TeamCaptainAmerica! What about you?
How do you get your Captain America fix?

What would you ask Chris Evans if you got to be in an interview with him?