The Boogeyman will get you!

“You better go straight to sleep otherwise the Boogeyman will get you!” -Most of our mothers at some point

Also known as the “Bogeyman”, this folklore celebrity has been shared with children around the world to ward off bad behavior. There are so many of these mythological creatures spread throughout many cultures that I can’t even begin to list them all in this post (click here for a wiki list). In the United States alone there are several “Boogeyman” creatures such as the Jersey Devil, Bloody Bones and the Boogermonster.

A lot of scary things come from Jersey (sorry Joe). I’m not talking about “Snookie” or the “Situation”, though most of you may be thinking, “What could be more terrifying that those two clowns?”. I’m actually referring to one of Jersey’s less glamorous claims to fame, none other than the dark and ominous Jersey Devil. 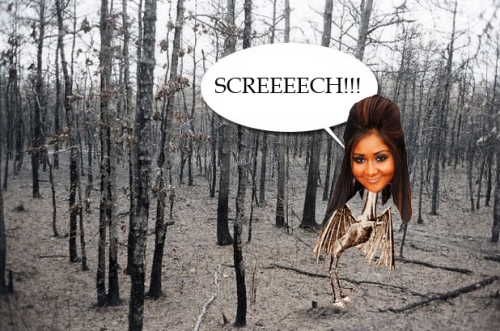 Said to come from the Pine Barrens of New Jersey and told as far back as Native American Folklore, the Jersey Devil has a twist from the traditional “Boogeyman”, and is known as a flying biped with hooves that scares off tourists rather then children. It is said that the tale of this beast comes from the legends of the Boogeyman. This horned, goat-headed creature with sprawling bat-like wings, tiny arms, vicious claws and a forked tail is often said to have a blood curdling scream that announces his arrival (okay maybe it could be Snookie). Needless to say, he doesn’t seem nearly as scary on the logos of the “Jersey Devils” hockey team.

Rawhead and Bloody Bones
Steals naughty children from their homes,
Takes them to his dirty den,
And they are never seen again.”
– Nursery Rhyme, Yorkshire, UK

In more traditional “Boogeyman” fashion, Bloody Bones is feared by children from the UK all the way to the Southern United States where legends of this monster came about in the Late 1600’s.

Often referred to as “Rawhead”, “Tommy Rawhead” and “Hobgoblin” (in the UK), he is said to live near water (and sometimes in dark closets and under stairs). Dare to peek into the darkness and you may witness his blood-dripping jaws as he sits perched upon a pile of naughty children’s bones specifically, children who tell lies or say bad words. The Oxford English Dictionary cites 1550 as the earliest entry of Hobgoblin, Rawhead and Bloody Bones.

Much like its northern counterparts, there are quite a few scary things that creep out from the rural parts of the Southern United States. Yes! Honey Boo-Boo is definitely one of them. Just a little less scary however comes the legends of the “Boogermonster”, told to children to keep them from playing outside in the dark.

Other notations throughout the United States:

In Cherokee Indian Culture (from North Carolina), during festivals, masked males would participate in a dance to frighten children into being good (they would also poke fun at politicians and seduce young women by chasing them around). This was called the “Booger Dance” and the male participants were called the “Boogeymen”.

In the Pacific Northwest the Boogeyman was said to become a green fog and in almost all of the folklore it is said that he likes to stay beneath children’s beds.