Illustration of the Winter Goddess

The Cailleach is the Winter Goddess, she who brings in the cold season. She is often portrayed as an old woman, a hag. There are many legends of her throughout Scotland and Ireland, but there are particular places she is associated with, such as the Beara Peninsula in Ireland where she has come to be known as “The Hag of Beara”.

There is a legend about the end of winter that may sound familiar to many Americans. On the eve of February 1st, the Cailleach goes out of her cave to gather firewood. If the weather is fair, she can collect more fuel for her fire, and thus the winter weather will continue for another six weeks. If, however, the weather is foul, then she cannot gather more wood, and winter is over. Perhaps you recognize some similarities with Groundhog day? 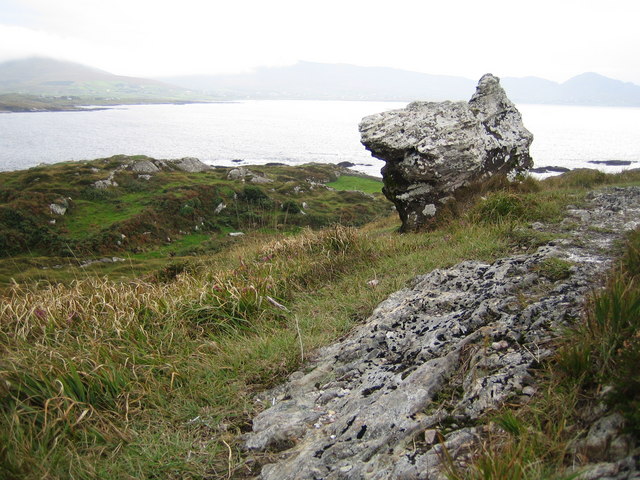 The Cailleach Beara or the Hag of Beara Legend has it that this rock represents the fossilized remains of the face of the Cailleach Beara awaiting her husband Manannan, God of the Sea, to return to her. Her presence still haunts visitors who leave coins, trinkets and all sorts of other small offerings, on and around the rock. (Photo credit: Wikipedia)

In Scottish legend it is told that the Cailleach walked along the earth with an apron full of stones, and when one dropped out of her apron, it became a mountain. A goddess is not really a monster, but she does bring on the winter, which many consider a small death, so perhaps she is a bit monstrous – or at least to be feared and respected.