Few places can pull off being both gorgeously picturesque and quietly eerie like Whitby can. It’s a town that blends coastal beauty with an ancient Gothic bleakness, with the ruins of the abbey standing as a sentinel over the streets below.

It’s no surprise then that Whitby is a town steeped in mythology and has been instrumental in bringing to life fictional characters like Bram Stoker’s Dracula and Robin Jarvis’s warlock. Almost every night you can find a top-hatted tour guide whisking crowds through the dark streets telling tales of the many ghosts that are said to inhabit the port town.

But it’s not just the town that’s soaked in vibrant folklore. Should you venture up the coast midway to the fishing village of Runswick Bay you will find caves tucked into the coastal walls. One such cave is known as Hob Hole, a place where in the past smugglers would stash their contraband. 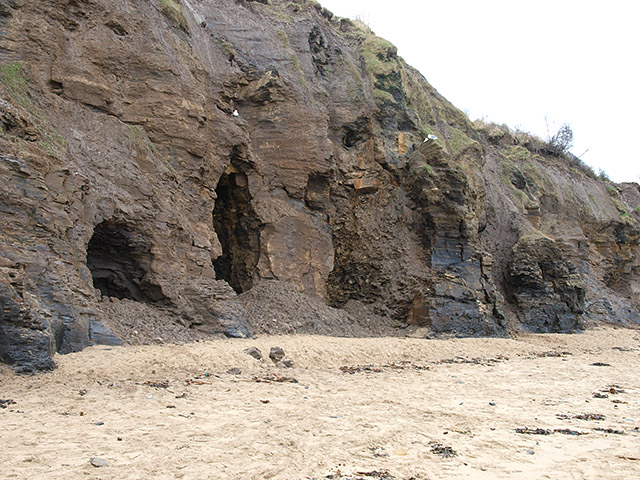 English: Hob Holes Caves in the cliffs near Runswick Bay. As at Boggle Hole near Robin Hood’s Bay, caves here became associated with legends of hobgoblins. This one was reputed to have been able to cure whooping cough. Other local hobs lived at Kettleness and Mulgrave Woods near Sandsend. The original cave was destroyed by jet-mining which is probably how the current caves originated. (Photo credit: Wikipedia)

In local legend, Hob Hole is said to be inhabited by a little mischievous person called a boggle, which is a type of hobgoblin (also referred to as a hob or boggart). Boggles are believed to be malevolent, souring milk and hiding people’s belongings, but the particular inhabitant of Hob Hole was said to have the gift of being able to cure whooping cough. Fishermen’s wives were said to take their sick children into the cave and ask for help, while their husbands were too afraid to do so.

In order to ask for the boggle’s assistance, nineteenth-century historian John Walker Ord explained that “The patient was carried into the cave, and the parent with a loud voice invoked its deity:

Hob Hole is just one such location where boggles can be found. In fact, the entirely of North Yorkshire is a playground for these creatures, so you’re bound to find similar legends in other areas.